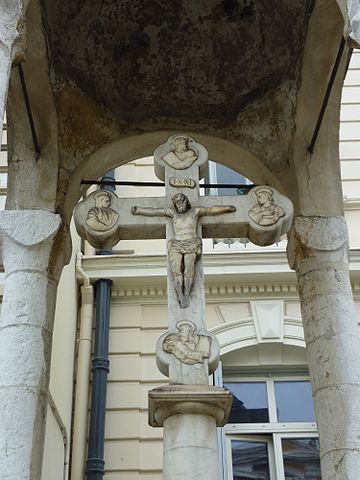 In 1538, Charles Quint, Emperor of Germany and king of Spain, Francois the 1st, king of France and the pope Paul III meet in Nice. Actually, Charles stays on his boat, the french king stays in the castle of Villeneuve and the pope in a monestery which doesn't exist any longer. The kings are here on the pope's invitation to try and end the war which has been raging between them for years.

The poor pope will have to commute between the two kings who refuse to see each other. His efforts won't be vain since a 10 years truce is eventually signed.

The Marble cross celebrates the truce. The cross itself was broken several times and what you see now is a substitute. the pillars of the onument are the original ones. the monument is not spectacular but if you happen to see it....

It is located in front of the number 25, rue de France. Very few inhabitants what it means.

On the opposite side of the street is the "Pope's column". It was erected in the 19th century to celebrate 2 shorts stays the pope Pie VII had in Nice in 1809 and 1814.