As you see, Nice is on the Eastern bank of a river : the Var. It belongs to a large metropolis spreading from the Esterel  mountains West of Cannes to the italian border. It is almost 80km long, and includes among others  Cannes, Grasse, Vallauris - Golfe Juan, Antibes, Cagnes sur Mer and St Laurent du Var West of the river, Villefranche sur Mer, Beaulieu sur Mer, Eze, Cap d'Ail  Monaco Monte-Carlo, Roquebrune Cap Martin and Menton East of it. You can start your car on the Croisette near the Palais des Festivals in Cannes, ride until the border and stay in town all along. Zoom out two times to see the whole metropolis.

Nice has around 350,000 inhabitants and is the 5th city in France. The whole metropolis totals more than 600,000 inhabitants.  Mainland France is divided in 94 "departements". Nice is in the 6th one by alphabetical order : the "Alpes Maritimes" which also includes Cannes, Antibes, Menton, Grasse... That's why you'll see "06" on the registration plates of the local cars. 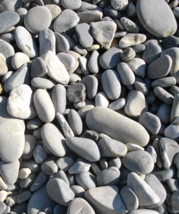