To ride a bicycle in Nice is not always nice and sometimes dangerous. There a bicycle paths, though, but their safety varies a lot.

Some of them consist in a simple line painted on the pavement. They are very often used as parking spaces by cars (see below on the left). Others are located on sidewalks. There you ride among pedestrians who care more or less. You can use them if you don't ride too fast, but not if you mean bicycle as a sport. This is true for the bike path along the sea on its Eastern part. (see below on the right).

There are also some separated bicycle lanes. For exemple on the Western part of the Promenade des Anglais or along the The Paillon promenade, avenue Felix Faure (see below) from the Albert 1er Garden to the Square Head . There are not enough of them, unfortunately. 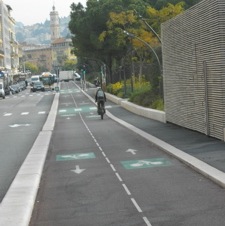 A must-do, even with children

It is possible to ride along the sea all way long from the airport to the harbour on a bicycle path (7km each way), apart from the automobile traffic. This is really a nice and easy ride which you can do even with young children. Do not miss it. It is completely flat, apart from 2 very slight slopes, one near the harbour, the other midway.

Westward, this bicycle path continues beyond Nice, to Cagnes sur Mer. After the airport, you'll have to cross a few roads (entrances and exits for the seashore road) around the airport, or near the Cap 3000 shopping center in St Laurent du Var, on the other side of the Var river. Beware, especially with children because cars drive fast and pay no attention to the people who are on the bike path.

As an alternate you can use the separate bike path on the Eastern side which goes up the Paillon river to the square head, along the Jardin Albert 1er (Albert 1er garden), avenue Felix faure, the Theater, the MAMAC , the Square Head and the public library. At the other end you can, if you enter the airport, reach an other bicycle path which goes along the Var river during a few hundreds of meters.