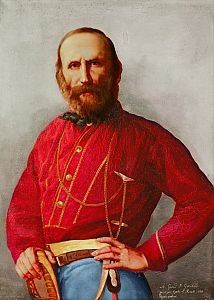 The hero of the Italian unity

Giuseppe Garibaldi was born in Nice in 1807.

Back from South America where he has fought in Brazil and Uruguay and created an army of "red shirts" famous as far as Europe for its actions, he offers the King of Sardaigna, Charles Albert his services.

Italy is then made of many states and kingdoms. A large part of the country is occupied by Austria, and the states of the Pope divide it in two distinct parts..

Garibaldi fight against the Austrians near Milano without much success than walks towards Rome where he proclaims the Republic. Napoleon III, the french emperor decides to help the Pope (Rome is his capital) and Garibaldi has to flee to the USA and then to China.

Back in 1854 he offers his services to the new king od Sardaigna, Victor Emmanuel, and fights again against the Austrians, forcing them to retreat from Lombardia. under Cavour's direction, the Northern part of Italy is slowly unified. Garibaldi will then conqueer Sicilia and Naples, adding the Southern part of Italy in 1860.

He will fail again in gaining Rome which will stay in the hands of the Pope until 1870.

In France he will fight against the Prussians and defeat them in 1871 in Dijon.

He will then decome a memeber of the Italian parliament and will die in 1882.

The "other" large square in Nice bears his name, at the end of the Republic street.