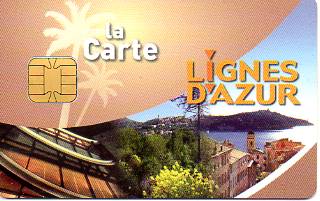 This article deals with the buses and the streetcars in Nice.

If you want information about the buses in the region, use this link.

BEWARE if you use this streetcar to go to the airport. Check the final station of the streetcar you get in and make sure it goes to the airport. Otherwise you will end up in the administratif center and you might miss your plane.

The streetcar line 3 is open from the airport to St Isidore via the Stadium Allianz Riviera.

In the beginning of september, the bus network has undergone major changes.

Before we detail the rates, here are the main ones:

A trip allows you to make one connection within 74mn after the first date stamping provided this doesn't make your trip a round one.

There are several special rates:

Note : only the AERO ticket enables you to use the 98 and 99 direct lines to the airport. (See next page)

If you stay in Nice several weeks it may be worth buying yourself a bus card. It costs 7,80€ and then you can buy electronic tickets and depending on your situation get a few discounts. Go to a Ligne d'Azur office with all necessary documents.

If you're interested in using buses to go to other places in the Alpes Maritimes read this article : By bus - 06


You can download the pdf chart of the bus and streetcar network (8MB). You can get a paper copy at the lignes d'azur offices.

You'll find the lines timetables in the Lignes d'Azur offices or on their website.

You can also use this free app, available for Iphone or Androïd. It claims to be able to produce itineraries but they often are very weird. It works well, however, to give you the timetables, in spite of a user-unfriendly interface.

There are only 3 Lignes d'Azur offices in Nice and they are often overcrowded. Ask when you enter them where you have to queue. The desks have specific purposes. Some are manned by Lignes d'azur emplyees, others by Conseil Générl ones, others still by "Vélo bleu" ou "Auto bleue" employees (in the Thiers office only). If you wait in front of the wrong desk you'll have to queue again from the beginning.


There is a bus transportation service for handicapped people who cannot use regular buses. It's called Mobil'Azur. Trips are made from adress to adress, with a booking. The cost of a trip is 1.50€ (in 2016).

You must first prove that you're entitled to use this service. You are entitled automatically if you're in a wheel chair or if you're blind. In other cases, you must put together a written case which will be submitted to a medical commission (they meet once a month). It will decide whether or not you can benefit from Mobil'Azur.

If you're blind or in a wheel chair, you may benefit from it even if you're only temporarily in Nice and don't live there.

When your right has been established, to get a transport you call 0805 20 06 06 (toll free number from a french land line) to book it.