There are many ways to go to Nice.

The A8 highway linking the Rhone valley to Genova in Italy goes to Nice. BEWARE, the speed limit is 110km/h or less on the highway everywhere in the Maritime Alps (from Mandelieu, West of Cannes to the italian border), instead of 130km/h usually in France. The speed limit is 90km/h on a large part of the Nice bypass. 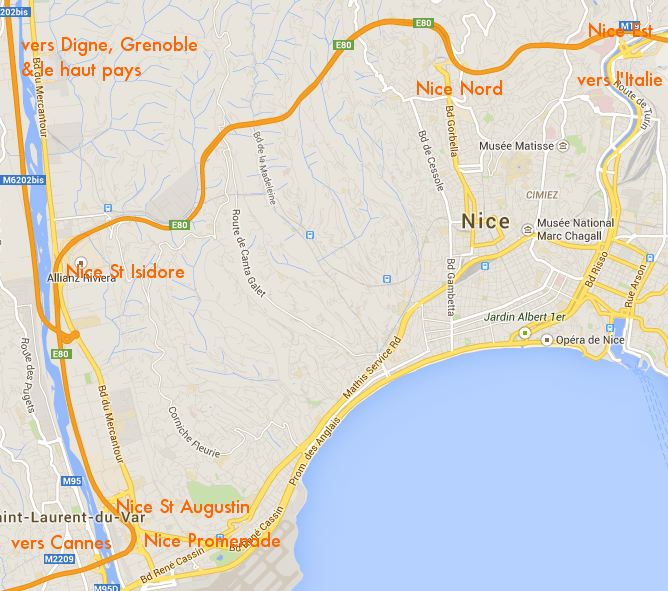 There are 5 exits in Nice. If you come from Cannes, you'll meet in order:

4 passengers stations, one goods station and several rail stops in Nice, on very different lines. Let's clear this up.

The SNCF is the national railway company. Almost all trains in France belong to this company. There are a few exception, though, with one worth noting in Nice.

If you travel long distance, you'll probably arrive in the SNCF main station "Nice Ville" (1). Some people sometimes call it "Nice Thiers" because it is located avenue Thiers. From there, if noone comes to pick you up, you'll be able to take the streetcar or buses to get to your destination, or a cab. You'll also be able to rent a car. Most car rentals have a desk in the station. Eventually you'll be able to hire a Vélo bleu, a "blue bike", a bike station being just in front of the train station.

The track coming from Marseille bears most of the traffic. Locally TER (regional trains) commute to and from coast cities between Cannes and Vintimille. Many stop at all stations.

Therefore it may be interesting , if your train stops there to use one of the other train stations.

Those two stations, like "Nice ville" are located on the track linking Cannes to Vintimille. But in "Nice Ville" starts an other track going into the Roya valley, towards Tende and further to Cuneo in Italy.

An other railway exists in Nice. It does not belong to the SNCF but to the "compagnie des Chemins de Fer de Provence" (Provence railways company). It goes to Digne in the Alpes de Haute Provence, North West of Nice. No connection with the SNCF trains since the tracks have different widths. You're unlikely to come to Nice this way. This company has its own station, the "Gare des Chemins de Fer de Provence" - Provence railways station -, also called "Gare du Sud" - southern station (4). From this station you can walk to the "Libération" streetcar halt,  5mn away. The trains stop in several places within Nice before they enter the Var valley. More information about this railway.

Here you will find information about the ways to go to and from Nice airport.

The Nice Côte d'Azur airport is the third in France after the two large Paris airports, Roissy et Orly. There are many airlines going to Nice.

To know everything about the airport and the available flights.

There are two terminals in the airport. Be sure to check on your tickets from which one you leave. Free bus shuttle commute from one to the other but you'll need 5 to 10mn, plus the wait time.

The airport is very close to the city center (7km) and going from one to the other is easy and fast.

The easiest way to go to the airport is now to use the line 2 of the streetcar. It starts at the avenue Jean Médecin and will soon depart from the port.

BEWARE : check the final station of the streetcar you get in. Some go to the airport (AEROPORT), others to an administrative center (CADAM). If you make a mistake, you might miss your plane.

The city buses network will deeply change in september 2019. More about this later.

The airport bus station is just next to the Terminal 1 building. Exit the terminal, turn left and walk along the building. From the Terminal 2, take the bus shuttle.

From or to Terminal 2 take the free shuttle comuting between the terminals at the airport bus station and get off at Terminal 1 to make the connection.

To get all the information on schedules and available tickets see the Lignes d'Azur website. This is the city's bus company.

The airport will in 2018 be connected to the streetcar network.

All car rentals are available at Nice airport. You'll find their desks in the two terminals. An extra tax applies to all rentals taken in the airport. (The money goes to the airport managers.) If you have time and want to save money on your rental take a bus and rent your car downtown.

The SNCF train station Nice St Augustin (T) is a 10-15mn walk from the airport Terminal 1. Many local trains stop there, going from Cannes to Vintimille along the coast and stopping in Nice Ville.

Beware, though, as stated above trains in the area are not reliable. Delays, cancellations, stikes... If you choose trains to go take your plane  make sure that the train is not cancelled and that it is not late.

A vélo bleu station where you can rent a bike is located just in front of Terminal 1, next to the bus stop along the seashore road. (Southern side, no need to cross the street.) A bicycle path goes from there to the city center (jardin Albert 1er, 7km away). It's completely flat and you'll ride along the sea all way long. Wonderful. How can you rent a bike ?

They are expecting you just in front of each terminal.

Several companies link the airport to Cannes, St Tropez and Monaco. To contact them.

With your own plane

The Nice airport is meant for airlines. Landing and parking taxes are high enough to prevent you from staying there. The only jets on the ramp belong to billionnaires or arab emirs. Also there is no longer any 100LL on sale. If you come to the Riviera with a private aircraft, go to Cannes Mandelieu (LFMD). This is the only local general aviation airport.

The harbour is located East of the city.

If you come from Corsica with a ferry, the wharf is located at the end of the harbour (down right, blue logo) and if you don't have a car you will have to walk 10 mn to bypass the bassins and find yourself in town with bus lines. You can also take the buses in this street, but there are not many of them, or call a cab, or rent a bike (a  vélo bleu station is located boulevard Stalingrad, ahead after the harbour exit for the cars, a few dozens of meters away).

If you come with your own boat and find a place in the Port Lympia, you'll be closer from public transportation.

To know eveything about the harbour.


Since 2015 inter cities bus liaisons are open to the private market. There are already bus liaisons to Aix en Provence, Marseille, Gap, Grenoble run by the Provence Alpes Cote d'Azur region. They leave from the eastern bus station, next to the Vauban and Palais des Expositions streetcar stops. So do the eurolines buses. New lines should appear in the next few monthes.

Unfortunately this bus station is not used by all bus lines in Nice and many departement lines leave from elsewhere.

Flixbus, for exemple has several departures : at the airport terminal 2 bus station, or at the city bus station, or near the main train station. Check their website to know where your bus will stop.

Same thing for eurolines and their local subsidiary isiline.