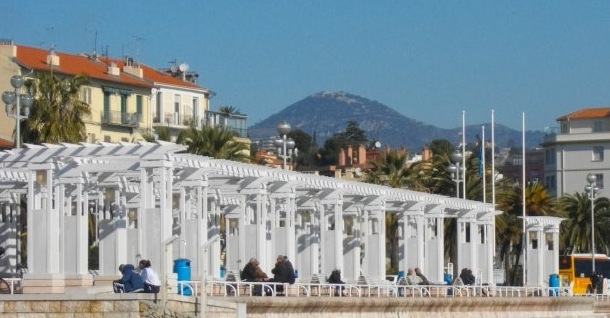 The Mount Chauve seen from the seaside in Nice

It's an extraodinary belvedere on Nice and the coast. You're almost 3000ft high and you directly overlook the city. The place is not very famous, but the view on the Nice and the Coast is simply breathtaking.

The road to go there is a dead end one. It is fairly narrow with many hair-pin bends. It is closed on the last kilometer and you will have to finish walking using a trail (shorter) or the road (longer but easy even with city shoes). It is easy to park a car just before the barrier blocking the last part of the road.

If you overcame all this difficulties you'll get to the fort which tops the Mount Chauve. Climb the (steep) stairs on your right and from there you will have a breathtaking panorama*** over the coast, 180° wide, including Nice, Cannes , the Esterel and the Baou de St Jeannet. The fort can't be visited and on the West, the view is partly spoiled by antennas. Nothing serious, though. Just go down the road 100m to avoid these antennas.

To enjoy the sightseeing on the Mountains-ward side (North), you have to walk around the fort. You can do it using the moat inside the fort, but it is often jammed with high grass. There are several trails outside the fort. The easiest to find is 2 bends below the top. It begins with a stair with a metal banister. use it. After around 150m, it splits in 2 trails. Take the right hand one, going up. The other one is a dead end going to an antenna. You'll enjoy a wonderful view over the 3000m high moutains of the Italian border. You can have the same kind of view from the Revere fort on the Grande Corniche, and it is easier to go there, no walking around a fort. Do not go to the Mount Chauve to see the Mountains in the North, but if you are already there try to walk around the fort.

You can also walk to the Mount Chauve. Use the GR5 (the trail linking the Netherlands to Nice across the Alps and the Vosges) from Nice or the Aire St Michel, North of the city, or from the Aspremont parking lot.  The GR doesn't go directly to the summit, but passes 100m below. When you reach a water tank for firemen, take the gravel road on your right. You'll reach the road going to the summit, in its part which is forbidden to cars. Beware in summer, there is no shade.

By bicycle the road is fairly quiet, with few cars. But the surface is uneven and you have to brake relentlessly on your way back because of the bends. The descent will hurt your forearms. It is possible to go to the summit with a road bicycle, you don't need a mountain bike.

If you liked "the Persuaders" you will maybe recognize the road which was used in one of the episode (Angie...) and the baracks where the final scenes where shot, with Roger Moore and Tony Curtis. The baracks are now a shelter for animals. When you park your car at the top of the road, before the barrier preventing cars to go to the summit, there is an other road, going to an other summit, next to the house. Less than 100m further, you will see the barracks on your right.

On the flanks of the Mt Chauve , but far from the top is also the Pyramid of Falicon.

The Mt Chauve on a map.