This is the main city of the upper Vésubie valley. From there you can go to the Boréon, the Madonne de Fenestre, the Gordolasque valleys to hike in the mountains of the National Park of the Mercantour. You will find shops to buy food, have a drink...

Paragliding, canyoning, via ferrata... you can do this and much more in St Martin Vésubie.

If you plan to hike several days in the Vésubie valley, St Martin is a good place to stay. There are 2 campings, B&B, hotels, a parking for camping cars.

To find a room in some of these places click here.

On your way, you will see the advertising for the Alpha Park and its wolfes, located in the Boréon. According to us, there is no point visiting it.

The tourist office of course has a site with a different opinion.

St Martin Vésubie and the Jews.

During WWII, the Maritime Alps were occupied by the Italians from 1941 on. Mussolini didn't kill Jews like the nazis. Italians refused to hand jews, even foreign ones to the Germans. But foreign jews had to live in St Martin Vésubie or the valley, which became a shelter for them.

When in 1943 Mussolini was captured and the Nazis invaded the Maritim Alps, the Jews living in St Martin escaped towards Italy using the Fenestre pass. Italian soldiers retreating through the Cerise pass also took Jews with them. The SS would capture them a few days later.

An evacuation plan for Jews living in Nice and the Vésubie had been hastily prepared by some Italians, helped by French. A boat waited for them in Genova. But the German having also invaded Italy, the boat never left.

By the end of September the SS searched the valley, looking for Jews to take them to the Excelsior hotel. A large part of the population of St Martin and the valley hid the Jews to protect them. This article (in French) of the association des Justes will give you more details. 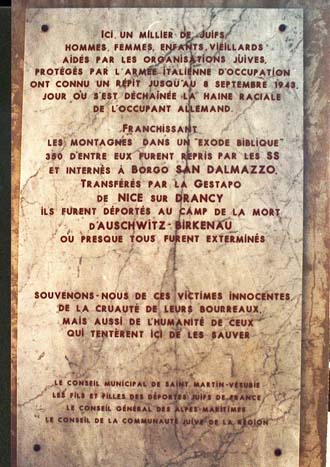